It is a verbosity word that various images come out only by it when it catches eyes. You know now that this “plant dyeing” as one of the craft arts, was actually a registered trademark a while ago.
I will tell you the real meaning and significance of “plant dyeing” and its power by spending a little time and space.

Reason why tezomeya does not use the word “plant dyeing”

I do not know if anyone has noticed, but tezomeya hardly uses the word “plant dyeing”.

Although it is a slightly nasty story, it is disadvantageous to make a business to say that dyeing factory using natural dyes does not put “vegetable dye” in sentences inside their site.
Although it sometimes is hard to convey the dyed points to those who are watching, the most problematic aspect on the operation of the site is that it becomes harder for people to search from the search term with “Kusaki dye” as a key word .

I would like to avoid using the word “plant dyeing” if possible, though I know that.
This is because I think that this word, because I have a unique worldview as I mentioned earlier, because I want you to see the color of the natural dye in our workshop without prejudice .

However, it is not the only reason why such a small fancy is a reason. Actually, there is another very big cause.

It is because people think that only a limited number of people in Japan are able to use the word “plant dyeing” in its original meaning, this is because Yamazaki Yamazaki including that late Aoyuki Yamazaki, Only the members of the house will come.

Aiki Yamazaki · · ·
Unfortunately it was passed away in 2010, but I think that nobody knows his name in the dyeing industry of natural dyes. It is a thoroughbred of natural dyeing world.
Twenty years old There are hundreds of plants that have been dyed out by one of the studies of plant dyeing. As well as yarn dyeing and cloth dyeing with natural dyes, the qualities of important remains in the Nara period and the restoration of ancient dyeing, etc. I was a craftworker and an ancient dyeing researcher who was noticed in various genres anyway, I will go to the volumes.

As long as you are still alive, if you search for a book of vegetable dyeing at a big bookstore, probably half the place would be the hand of Yokosaki Aoki. The shopkeeper restored his superiane clothing for the first time in tezomeya, and the research presentation exhibition was held, but of course I was impressed and still memorable clearly. At that time, of course, there was still a lot of counter measure which can not be dyed with the skill and knowledge of the shop owner very much.

This Aoki’s father is Ms. Akira Yamazaki, and the word “plant dyeing” is a word that this father registered as a trademark in 1971.

Mr. Yamazaki was not originally a dyeing house.

Mr. Bin, who was acting as a prominent literary artist, moved to Tokyo from Nagano at the beginning of the Showa era, seeing that sericulture farmers in Nagano Prefecture of the hometown suffered under the influence of the Great Depression and other people suffering.
So he thought of a side job other than sericulture. I thought that farmers’ hands were dyed by hand for their own clothes, hand-woven and raised to crafts.

However, as far as dyeing is concerned, it is an outsider. I will start making things with the help of a local azuya store and local folk artists dyed and weaving as a family business. 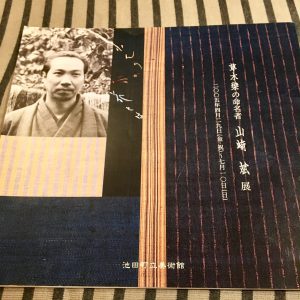 The hard work of Yamazaki Tsubane at that time was written in the catalog distributed at “Tsutsumi Yamazaki, a nominee for plant dyeing” held in 2005, but the technique of dyeing natural dyes, which had already been declining at that time at that time Imagine that it was not a common thing to revive up to the area of ​​product creation.
I think that he probably studied various books by self taught. He also saw the materials such as Kenichi Gotoh and Rokuro Uemura, dyeing researchers who started publishing books at the time, materials such as famous botanist Mitsutaro Shirai. Every time we hit the pertinent document, “Oh, I wonder if Yamazaki Bin was studying like this” and so on. .

And in order to disseminate the acquired arts and crafts techniques, local farmers also systematically teach natural dyeing. At the same time, in order to line up with the dyeing by synthetic dyes that had begun to dominate the dyeing industry in Japan at the time, in 1973 the dyeing product with natural dye was named “plant dyeing”, and registered trademarks are accepted in the Showa 7 years.

Mr. Bin will run even further to the cultural reconstruction of craft goods by plant dyeing. A classroom, a demonstration here, a school of local herds in Matsumoto. And in Tokyo we have a store named “Kusakiya”, leaving it to the wife. During the war the activity is suspended for a while, but in the Showa 21 years after the war, with the adult’s eldest son Aoki opened the “Tsukishi Hand Crafts Instructor” and “Kusakida Institute” in Nagano. Another name “Moon Ming Township” is said and the foundation of the ideal village which Mr. Bin was envisioned as handicraft village, such as hand-woven pongee, paper making, and plant dyeing, is completed.

Afterwards, in 1953, we transferred “Kusakida Laboratory” to Takasaki city in Gunma Prefecture, Mr. Aoki became the director and will be present. And although this “plant dyeing” is now, it is supposed that anyone can use it because the term of the registered trademark has expired.

Trademark right (ownership of trademark registration) is a system that can be extended for many years if applied, so I think that Aoki probably abandoned the right at some timing is.

Mr. Bin and Mr. Aoki are dyeing researchers of parent and child falcons, but I personally think that these two persons are quite different from other dyeing artists. That is why all dyeing methods are open.

Mr. Bin originally started using natural dyes for his own work, but started doing research and teaching of dyeing for the establishment of crafts as a farmer’s side job, taking over that intention Aoki-san is also dyed with such a stance.
Imagine that abandonment of the trademark right of “Kusabu Den” is also one of those behaviors.

There are also people who are talking about Yamazaki Tsunen ‘s early Showa era activities over Kenji Miyazawa’ s ideal village, and it is unusual to disclose dyeing techniques more and more as I think so, As a writer or a craftsman, the world does not want to talk much about technology.
I believe that this open knowledge opening creates the root of the atmosphere of “Kodoba” called Kotoba.

Writers and craftsmen do not talk much about detailed recipes, of course, there may be aspects of secrecy of the company, but I think that there are other reasons why people called “first class” do not talk.
that is,
“Do not understand even if you talk …”
is.

I’m afraid to tell a story, taking tezomeya as an example here.
Tezomeya always keeps a memo for each stain and records all the details of what dye and so on, but what details such as the timing of thread stitching, stirring condition not to hatch at the kettle, and detailed work of such work are quite memorable I can not leave it.

Even in the place of an experiential classroom, this is already the only thing you can actually do for those experiencing it, so there is such a thing even at a shallow dyeing studio like history like tezomeya, so if that would be a big writer I imagine that it is only by techniques that are bad.
Well, I do not want to tell you, but I can not tell by just a mouth or a book. It could be misunderstood. So do not talk …. 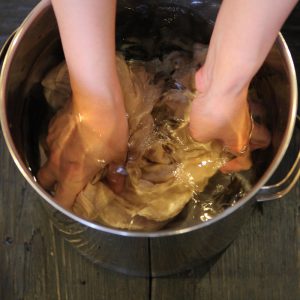 But Yamazaki parents are different. I understand if you read Aoki’s book, but how to burn out the dye, the proportion of mordant blending, the time of boiling … are written up to a fairly fine detail.
Conversely, since the major books that are written in detail so far are only Yamazaki Aoki’s books (there is nothing unusual to search), speaking of Yamazaki’s staining of natural dyes There are many. Many people can enjoy Yamazaki’s dyeing. Some of them will be great works of art, others will be personal hobbies. Various “plant dyeing” works can be made.

And, in such works there will be a lot of dyed fabrics whose color falls abnormally quickly, and some dyes which do not understand somewhat come out ….

If you say without misunderstanding, do not you feel that everything from wonderful things to things that are not amazing are all enclosed in a single word “plant dyeing”?
Among such finished products, there may be things that Yamazaki Oyako did not originally wanted. However, it is probable that Yamazaki parents have accepted and accepted all such circumstances, and Aoki will continue to promote the dyeing industry without changing the stance as long as the life continues from now on . I can not help being awed by my energy and passion while being young.
It would be nice if we entered the word “plant dyeing” to that energy.

Aoki was said in a book, “What I do is triggering me if all the dyeings of the world turn into plant dyeing …”. For that reason, I was seriously dyeing as an active person until the end as long as I lived.
And now, my son ‘s Mr. Kazuki and Mr. Akihiko are going to have that intention.
I will admire the bottom of my heart. It is terrible and the word “plant dyeing” is usable only for us to use. There are various vegetable tree dyes, but I think that it is originally such a firm dyeing of aspiration.

Finally, quote from Aoki’s last work “The mystery of ancient dyeing 2 thousand years and its secret”.

Elucidation of dyeing culture is just a clue. The problem of mordant and water – I am aware of the knowledge that ancient people knew already, such as soft water, hard water, acid water, alkaline water etc. In addition, there are many future tasks such as dyeing with hot spring water. I would like to think about Ikaho’s Yunohana Dyeing etc. Someday I want to recreate all of the clothes of ancient people </ blockquote>
… I think that Mr. Aoki was still motivated to reproduce everything. 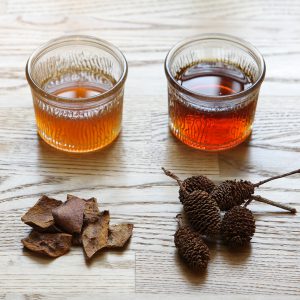 ※ We are not related to Yamazaki Aoki-san and all of its members, “Kusakida Laboratory” anything. There are no other things at all, but please contact me if there are problems such as mistakes, inappropriate parts for expression. We will correct and delete.

All tezomeya items are dyed at a dyeing shop in a workshop in Ky...

1. What is organic cotton in the first place? Organic means...

In the color dyeing with natural dyes there is a color called "s...

The other day, I made lipstick for the first time in a while. T...

All of the colors of the plants are all beautiful I do not thin...

The chemical dye which gathered the trend of contemporary scienc...